First let me show you a few hardcore BLPA supporters we have put in the game. Want to get in the game too? Follow our dyrstaty streams over on Facebook, Youtube, or Twitch. You should follow the Beer League Players Association at every social media network @theblpa

Alright folks it is football night in the big town and the Golden Gophers are rolling into Las Cruces from Minnesota. Big dreams, bad team describes your Aggies after Week #1. Head Coach Nicky Commish hinted at a redshirt decision after a humiliating loss to Texas and he follows through. Walk-on Freshman pigskin slinger Nick Fleehart has been named QB1 against Minnesota.

Sure I edited my name onto this player but I did not adjust any skill sliders. But there is one thing I had to change. Because well this is a reflection of me and I have some nice ones.

Look at this stud walk-on for the #BeerLeagueU Aggies. Of course I named him after me. I didn’t adjust any of his skill attributes but I did make this attribute more realistic. @beerleagueinc @theblpa pic.twitter.com/TIQSzpHj3f

On with the game 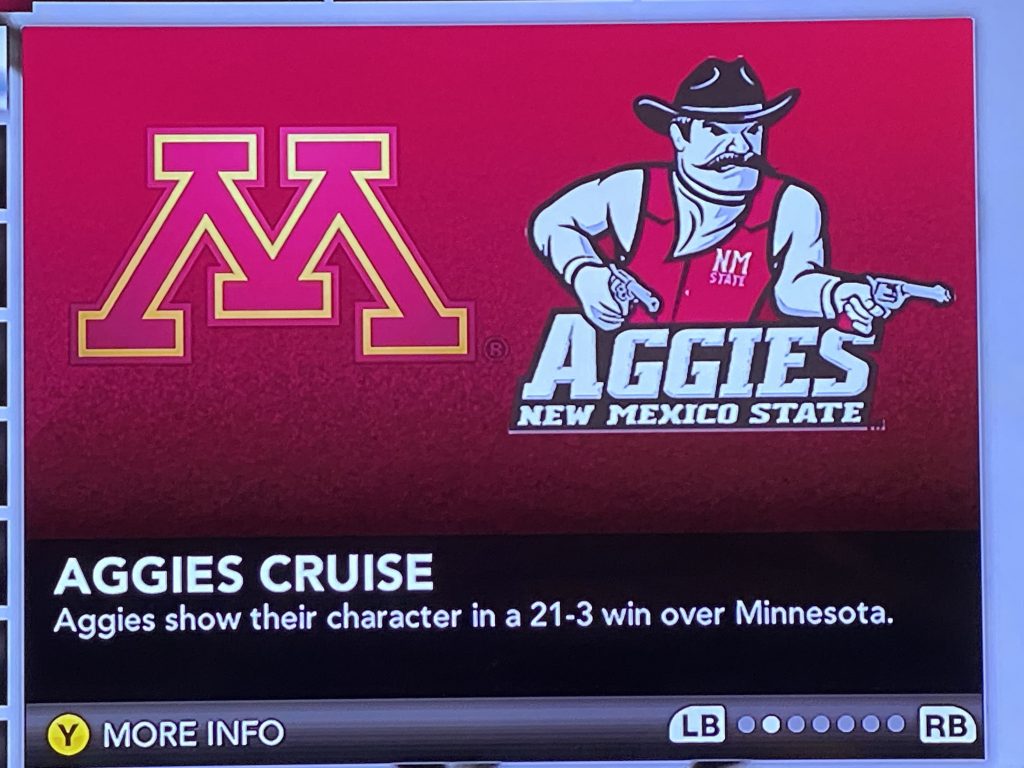 The Nick Fleehart era was ushered in with a dominating defensive win over Minnesota. Big Nick had an uneventful day but managed the game like real field general. His stats weren’t impressive going 12 for 18 for 145 yds and 1 int but the gameplan was to control the clock with the run which they did with 95 yds and 3 touchdowns.

Where the Aggies really shined was not he defensive side of the ball. The held the Gophers to 104 offensive yards, 6 first downs, and only 3 points.

Head Coach Nicky Commish told reporters all week that he laid out a game plan and challenged his team to execute.  After the game head coach was all smiles saying his squad answered the bell.

In next week’s battle of I-10, we will find out if the Aggies can built on their impressive performance against a power 5 school or if this week was just another Minnesota miracle. UTEP will certainly be looking to humble Beer League U.