In 1972, the upstart World Hockey Association (WHA) began operating as an alternative to the NHL. This league was founded by the same men who had previously founded the American Basketball Association (ABA). Both the WHA and ABA were disruptive in their respective professional sports, bringing about major changes that have lasted until the present. The ABA introduced the three-point line and also the slam dunk contest. The WHA did away with the “reserve clause”, which specified that an NHL player’s contract would be automatically extended one year when it was complete. This tied a player to their original team indefinitely. This is really why players never switched teams in “old-time hockey”. They didn’t actually have a choice. 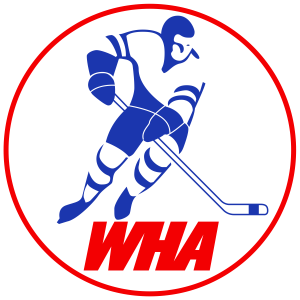 Players, of course, loved this. The WHA was able to attract many NHL players and stars of the time, including goalie Bernie Parent and Blackhawks star Bobby Hull. They began play for the 1972-73 season with 12 teams.

At the time, the NHL had 16 teams. Play in the NHL had declined somewhat with the rapid expansion of teams. The WHA initially was even a bit lower than that of the NHL, at least at first glance. Play quickly improved, however. In the 1974-75 season, they held seven exhibition games between the two leagues. The WHA won two and the the NHL won five, with every game being decided by only one or two goals. They also had exhibition games in the 1976-77, 1977-78 and 1978-79 seasons, for a total of 63 games. The WHA won the series overall with a 34-22-7 record. There was no doubt that the WHA was at least equal in talent to the NHL, on average.

The WHA wasn’t doing so well financially, however. While there were some stable franchises, others were struggling to make payroll. Talks of merging with the NHL began as early as 1977 but didn’t pan out. By the end of the 1978-79 season, only six teams remained.

At this point, talks of a merger began again. The NHL wanted four of the six teams, while the other two would be contracted. This meant that the owners would be bought out and the remaining players disbursed to the rest of the league in a draft.

The teams that would be merged into the NHL were the New England Whalers, Edmonton Oilers, Quebec Nordiques and the Winnipeg Jets. This would greatly expand the NHL in Canada, which was a plus. At the behest of Boston, the Whalers would be renamed for their home city of Hartford.

It was decided that the best way to handle the merger would be to treat all of the new teams as expansion teams, wiping out each franchise’s history and records. Each team could protect two players and two goalies, but the rest would go into that year’s draft, with all of the new WHA teams picking last at the beginning of the draft. This meant that the Edmonton Oilers of the WHA officially ceased to exist on June 22, 1979 and the NHL recognizes the Oilers as having been founded on that same date.

What this means now is that there are NHL records that are questionable because of this arbitrary decision to exclude WHA records that was put in place more for business reasons than for hockey reasons. There is no question that the WHA was on equal footing with the NHL by the time of the “merger”, but the NHL owners wanted the better end of the deal which is why they put all of the players in the entry draft. A little more backstory: there had been a lot of animosity between the two leagues and especially with certain franchises over the WHA signing players with NHL contracts and over the WHA signing picks that had been drafted in both leagues.

The ABA did the same thing, too. Records are in question when players such as Julius “Dr. J” Erving and Rick Barry have many seasons of stats missing. Some argue that if WHA stats are allowed, maybe AHL and international stats should be allowed too. This is totally different, because those leagues were not absorbed into the NHL. Young WHA players such as Wayne Gretzky may not have ever played in the NHL if the merger didn’t happen.

Right now, the NHL goals record stands at 894, with Gretzky being the leader. There is talk of how Alexander Ovechkin could break the record if he has the longevity and can score 50+ goals every season. Speaking of longevity, the second most goals in the NHL belong to Gordie Howe with 801. Howe began playing for the Detroit Red Wings in the 1946-47 season. He retired at the end of the 1970-71 season with the all-time most goals (at the time) with 786. He came out of retirement in the 1973-74 season to play with his sons for the Houston Aeros of the WHA. In six seasons with the Aeros and New England Whalers, Howe had 174 goals. He played one more season in the NHL for the Whalers after the merger, He was still productive in his final season (1979-80) as a 51/52-year-old, scoring 15 goals. This brought his career NHL total to 801 and his WHA total to 174.

Bobby Hull played longer in the WHA, totaling 7 seasons and 303 goals. Before that, he played for the Chicago Blackhawks for 15 seasons, scoring 606 goals. After the merger, Hull played 27 more games for the Jets and Whalers, adding 6 goals to raise his NHL total to 610.

Whether or not WHA goals are ever added to the official totals, they still happened and should have been official NHL stats all along. To leave them out is revisionist history. Parity can be assumed from the exhibition record and the fact that the player stats from the WHA were on par with similar players in the NHL season by season. To leave them out is like saying Barry Bonds is not the single-season home run leader because he probably was taking performance-enhancing drugs. It will be controversial but facts are facts.

To that effect, here are the top ten NHL/WHA pre-/post-merger goal scoring leaders (players in bold played in WHA):

The WHA legacy can still be seen today in the NHL. All of the franchises still exist, although the only one in the original location is the Edmonton Oilers. These four franchises have won the cup eight times, with the Edmonton Oilers only taking until 1984 to win the first of their five. The cup-winning teams were anchored by two WHA veterans, Wayne Gretzky and Mark Messier, who both played their first seasons (1978-79) with the Indianapolis Racers. Gretzky played only eight games that season while Messier played five. In 52 total WHA games for Messier between the Racers and the Cincinnati Stingers he only scored one goal. An interesting note about Gretzky is that he was never officially drafted at all — he had signed a personal services contract with the owner of the Racers at 17, was then sold to the Oilers, and then was protected in the entry draft and kept by the Oilers. Messier went into that 1979 entry draft and was picked up by the Oilers with the 48th pick — a WHA player picked by a former WHA team.

While a player such as Ovechkin certainly may be able to score enough goals to surpass Gretzky’s official 894 if everything goes right, it may be harder to get that extra 81 to pass up Gordie Howe’s 975 combined total. Unless that happens, Mr. Hockey will alway be the most prolific goal scorer. Check out more By The Numbers blogs.