By The Numbers – Flex That Hockey Stick

So I’m sure that when buying hockey sticks you’ve noticed that each stick has a number on it, such as 75, 85 or 100 (77, 87 or 102 for Bauer because they have to be different). This is what is known as the flex of the stick, and it basically indicates how much the stick will bend. What is not intuitive is that a higher flex number indicates that the stick is less flexible, while a lower flex number indicates the opposite. 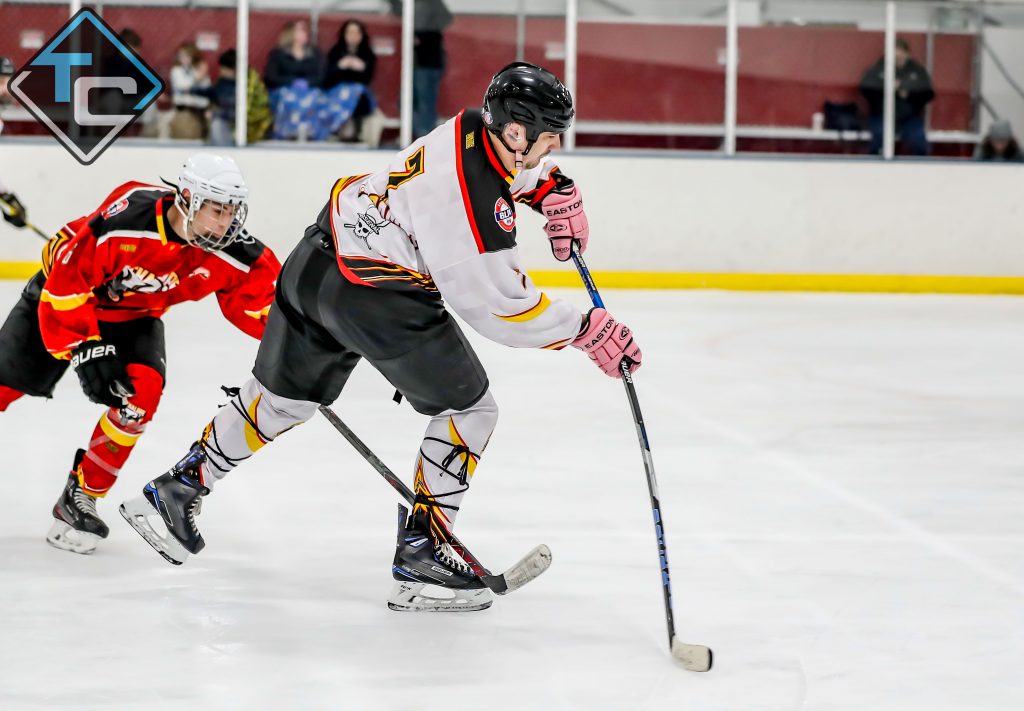 How do they come up with that number? First of all, I send apologies from the USA to the rest of the world. All of this hocus-pocus is based upon Imperial units. The flex number indicates how many pounds of force are required to bend (or deflect, to be really scientific) the stick one inch. So, it should take 100 pounds of force to bend a stick marked as 100 flex exactly one inch in the center. CCM/Reebok also includes a metric equivalent flex on their sticks. A 100 may be dual marked as 100/45, which equates to 45 kilograms of force required to deflect the stick 2.54 centimeters…which is one inch. This is what is known as a “soft” metrification – when the metrification is simply a conversion of the Imperial units, so they don’t appear to make any sense on their own. If they truly wanted to measure stick flex in metric units, they’d likely measure how much flex was required to deflect the stick 2 centimeters or some other rounded number.

So which stick flex should you use? The rule of thumb is… okay, I am going to go on a bit of a tangent here. I don’t really like to use the saying “rule of thumb”, and here is why. It is believed that the etymology of this phrase is that under an old English law, a husband was allowed to beat his wife so long as the maximum width of the implement was not more than that of his thumb. Evidence of this law can’t be found, but this association persisted around the world well into the ‘80s. We hear it all the time to refer to something that is a practical approximation, and while it is good for that, I will try to use a different phrase just because of the sordid history.

Let’s try again… So which stick flex should you use? An easy trick is to take your weight (in pounds, and you are only fooling yourself if you lie) and divide that by two. So let’s pretend that I weigh 200 pounds. I should use a 100/102 flex stick following this logic. And that is what I use, so fancy that. Ultimately, this is a matter of personal preference. Nick uses a 75/77 flex, but that doesn’t mean that he weighs 150 pounds. There are other reasons to choose a specific flex. A lower flex, being more “whippy” is a better choice for someone that wants to be able to put a lot a load on the stick for quick wrist shots. In this case, the lower flex will help because the quickness of release is more important than how hard the shot is. A center may want something more in the middle, since their stick may take more of a beating and a lower flex stick is ultimately less durable because it takes more stress. Defenders generally want a stiffer stick because those will transfer more energy on slapshots, making them harder. You have to determine the maximum stick flex that you can actually bend, because this determines how much energy transfer you can harness. If you are a defender with an 85 flex but can’t adequately bend it, your slapshots will only have the force of your swing behind them. In that case you’d be better off going with a lower flex stick because that will allow you to maximize your shot potential from the point. 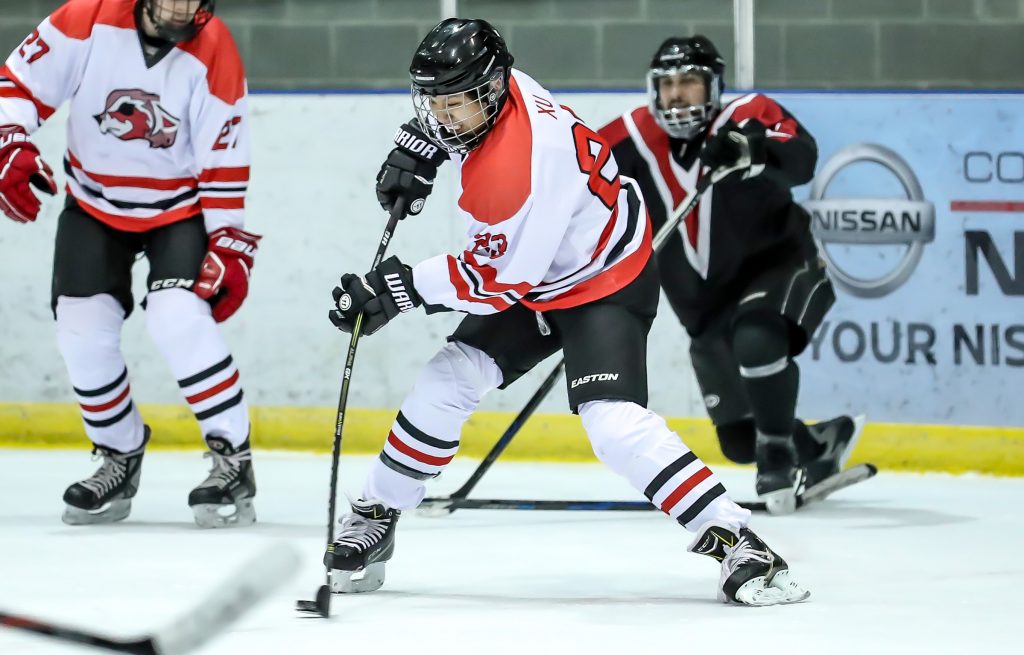 Another major factor for how the flex can affect your shot is how much you cut the stick down. You may have seen the marks on the stick near the end that show what the flex will increase to if you cut it there. The reason that it makes the stick stiffer is similar to how any type of lever works. The stiffness of the material used obviously doesn’t change, but rather the overall length is the variable factor in this case. In physics this is explained using Hooke’s law, with the spring constant representing the stick flex. The main variables in the equation for the spring constant are the force applied and the distance between the two supports (the stick length). This article from Penn State’s engineering department provides a more in depth explanation as to how this all works.

While I don’t see them much anymore, a see-saw (or teeter-totter) used to be a playground staple that taught children about mechanical advantage and leverage. If sit a kid on one end of the see-saw, it is much easier to push down at the opposite end to lift them. The close to the center that you push, the harder that it becomes. That is why you can sit closer to the center if you are heavier than the other kid to find the balance point. Cutting two inches off of a 75/77 flex stick will make it feel like an 85 flex stick, for example. Every bit cut off will increase this feeling.

If a wooden extension is glued in, the original flex of a cut stick can be restored or a stick can be made stiffer. This is because the increased length will increase the spring constant, which results in a higher effective flex. However, the glued joint will be a weak spot so you don’t want to make the extension too long.

What kind of flex do the pros use? There is a much larger variety than you may expect. Also, players are prone to changing sticks and flex more often throughout the season, with many lowering their flex as the season goes on. For example, Danny Briere often starts the season with a stiffer stick, such as a 90 flex, only to end up with a 75 flex by the end of the season. With that all said, the majority of NHL players use a stick with flex in the 85-100 range. 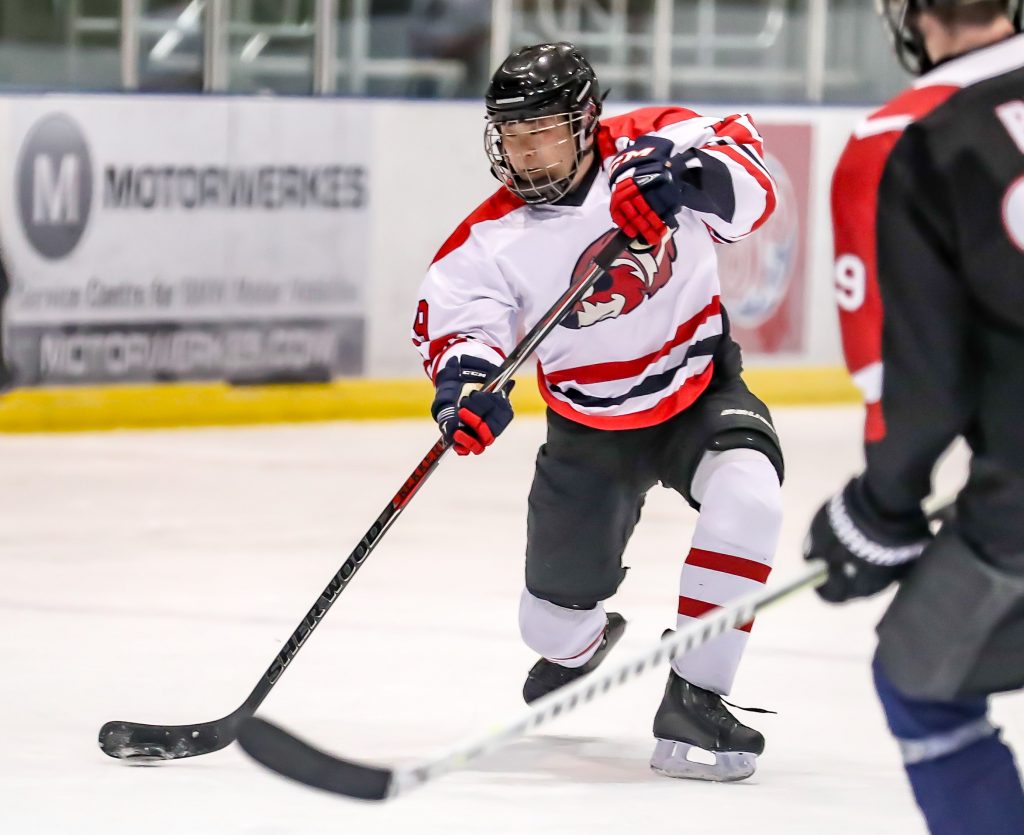 Forwards tend to use a lower flex. Some players with a notable low flex are Johnny Gaudreau with a 55 flex and Phil Kessel with a 65 flex. You can see just how much bend these players get out of their stick when they shoot. There are quite a few forwards that use sticks in the 65-75 range. Alexander Ovechkin is 230 pounds and uses a 79 flex stick, which is probably a big reason for his one-timer. For the hardest shot competition, I’d imagine that he uses a stiffer stick but I don’t know for sure. If he doesn’t, I’d imagine his shot would be even faster with a higher flex number. Sidney Crosby uses a 100 flex stick, higher than you may imagine for a skilled player. In his case this may have some advantages as a stiffer stick can be better in face-offs, and flex really doesn’t factor heavily into backhand shooting. Patrick Kane uses an unusually stiff stick for his size at 102-105.

Defenders almost universally use higher flex sticks. Zdeno Chara, at 6-9 and 256 pounds, uses a 150-160 flex stick regularly, twice as stiff as Ovechkin. Dustin Byfuglien and Shea Weber use 122 flex sticks, but Weber increases this to 130 flex for the hardest shot competitions.

We take for granted the consistency that the composite sticks provide. The stick flex is accurate and you can buy the same stick at different times and know how they will perform. Wooden sticks were a different story. Wooden sticks also had flex ratings, but instead of these being engineered into the stick as it was being made, they were assigned based on how the stick would flex after the stick was made. Players would often have to buy large lots and find their “gamers”, akin to how baseball players presently deal with wooden bats. The kick point of wooden sticks (where the primary bend and transfer of energy occurs) was much higher on wooden sticks. They would tend to flex in the center and whip from there, whereas composite sticks kick closer to the blade. More power is delivered the lower the kick point is.

When going to buy your sticks, keep in mind that senior sticks are generally only going to be available in flex numbers 75/77, 85/87, 95 and 100/102 regularly, with other stiffer values sometimes in stock. If you want or need less than 75/77, you will have to consider using an intermediate stick unless you can find pro stock in that value. Intermediate sticks tend to be shorter and typically have a 65/67 flex. Below that are junior sticks, where 55 flex is usually the highest. It is acceptable to flex the stick by holding one hand on top and the other in the center. See how hard it is to get that one inch of deflection and find the stick that seems right. Don’t put all your body weight on the stick or try to bend it too aggressively in the store. A small bend will give you enough idea. Lastly, keep in mind which type of player you are. You’re most likely to score with a quick shot, followed by an accurate shot, with hard shots being the least likely to score. Is your game better with power or placement?

Like the article? Make sure to share! And check out the rest of Carlo’s By The Numbers series here.